The day we finally went to the ER was the day I couldn’t put on my underwear and then face-planted in my kitchen, my body contorted on the floor like some sort of crime-scene chalk outline. I thought about how I might be paralyzed and wondered which of my darling pets would start gnawing me first. Et tu, Ella? (Just to clarify: I wasn’t naked in my kitchen. Separate incidents. Not that there’s anything wrong with that.)

So we head to Baptist NLR, the closest hospital to our house, and begin the obligatory ER wait. I see the nurse, another nurse, a doctor, and then a neurologist. He is a young guy, but he put me immediately at ease. He was competent, thoughtful, thorough, and Indian. I only point this out because, as it will become clear soon, there was a slight language barrier.

He did all of the standard neurological tests (I know this because I had epilepsy when I was younger). And then he had me walk up and down the hallway of the ER. I say walk, but it was more of a shuffle-lurch I was rocking at that point. I think he knew within the first five minutes what was wrong with me, but, like I said, he’s thorough.

And then we went back to the small ER room. He told us I would be staying at the hospital, which came as quite a shock because I expected to be in and out and on my merry little way. (Why I thought this, I still don’t know. Optimism? Denial?) I just nodded, trying to be the perfect patient, even though my throat was closing up as the anxiety crept in. His words were competing with my inner dialogue, and losing.

I needed to stay for days of observation and treatment, he told us. And I would get on steel rods for those five days, he said. He left the room to get my admittance paperwork started.

“Steel rods?” I blurted incredulously to Nick, my carefully constructed composure now crumbling. “Why on earth would I get temporary steel rods put in me? What good will that do? I don’t want surgery. Let’s leave. I’ll just keep the gown on.”

I was in hysterics.

Try as he may, Nick couldn’t stifle his laughter, which nearly provoked me to start throwing hospital equipment at him (Latex gloves, by the way, aren’t exactly as threatening as they may at first seem).

“Steroids, Jenn. He’s going to put you on a five-day treatment of steroids.”

I began giggling uncontrollably. Nick joined in, our chuckling filling that small room with the bad fluorescent lights and echoing down the hallway.

And in that moment we knew: Whatever came our way, we’d be OK. 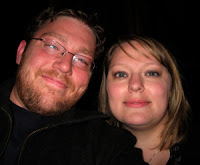 Jenn is a married thirtysomething web editor who works like she needs more money, loves her animals like they are her children, and eats like no one's watching. She documents the ups and downs of life and her recent diagnosis of multiple sclerosis at her blog Losing It.
Posted by Arkansas Women Bloggers at 8:00 AM