From the moment I brought my daughter home from the hospital 9 ½ years ago (and the two other children that followed) there hasn’t been a day go by that I haven’t thought of how bad I am at mothering. When trying to embrace “co-parenting” and allowing my then 3 week old to sleep on my chest, I fell desperately asleep, then was suddenly startled awake to realize she had rolled off my chest and onto the floor. When my second son was born, I spiraled into previous unknown depths of depression and misery. I couldn’t stand the sight of him and wondered where this foreign looking creature came from and how I could give him back. When my third child was diagnosed with a congenital heart defect at 28 weeks gestation, I blamed myself for drinking too much Dr. Pepper, forgetting to take my prenatal vitamins for two weeks while we were on vacation in New York – even going so far as to blame my proximity to the microwave for his malformed heart.
Now my “bad” mothering encompasses yelling too much, spending too much time on the computer, throwing away countless school assignments, and not being a presence at school parties.

In Ayelet Waldman’s treatise on motherhood – Bad Mother: A Chronicle of Maternal Crimes, Minor Calamities, and Occasional Moments of Grace, she writes in brilliant and witty prose that, guess what moms, we are OK and our kids will be just fine.
Her commentary covers everything from her relationship with her husband to her mother-in-law (a chapter I actually skipped, because my mother in law died a year after our daughter was born); she tackles breast feeding Nazis, her personal battle with bipolar disorder, her son’s failure to thrive at 2 weeks and another son’s ADHD. The most poignant, painful and heartbreaking is the chapter on “Rocketship” her third child, who was diagnosed with a chromosomal defect during an amniocentesis. After an intense internal battle, she decides to terminate her pregnancy. Bluntly she admits, “…I killed him.” I’m not here to cast judgment on Ms. Waldman, but, boy, that was a tough chapter to get through.
Ultimately, Ms. Waldman councils: I think it’s worth trying to be a mother who delights in who her children are…a mother who spends less time obsessing about what will happen, or what has happened and more time reveling in what IS. A mother who doesn’t fret over failings and slights…a mother who doesn’t worry so much about being bad or good, but just recognizes she’s both and neither. A mother who does her best, and for whom that is good enough, even if, in the end, her best turns out to be, simply, not bad.

I want to be that mother – a mother that knows her failings and limitations, but also knows that she loves her children desperately, and that even when I think I’m bad, I’m still pretty darn good.

Book group: For those in a book group -- I think this would be a fascinating book to read along with others and a potentially firecracker discussion! 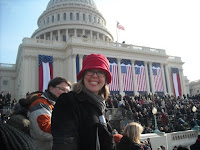 Daisy Mom (Melissa Mc) is a mother of 3; wife of 1; daughter, sister, friend, aunt; lover of football, politics, food, travel, walking, theatre and all things literary. She shelves books for a living and could spend hours staring at spines. This fall she will be the PTA president at her children’s elementary school. She can be found in front of the TV during every March Madness college basketball tournament and on every Saturday during college football season. Her youngest was born with a congenital heart defect and had open heart surgery at 5 weeks. She knows more about Children’s Hospitals than she ever wanted too. And when she grows up, she wants to be the first female commissioner of the NFL. Her blog is Gerbera Daisy Diaries.
Posted by Arkansas Women Bloggers at 6:30 AM