I have been working on building and planting a garden for about 2 weeks now. I felt it was really important to plant a garden this year. I am all about become more self-sufficient and I love the idea of living off the land and a garden is a great way to do that. I have planted gardens in the past but have always planted directly into the ground and have only had moderate success. We have a very clay soil and our yard is overrun with crabgrass. Both can be detrimental to a garden if not dealt with properly. To be honest, in the past I was just too lazy to really generate a productive garden.

In the back of my mind I have always considered the possibility of planting a raised-bed style garden. This would essentially eliminate my soil issues and would help to make the weeds much more manageable. Well, this season I decided it was time I actually did it.

My plan is big but it is a multi-year plan. I decided to start small this year and make four 4×4′ raised beds. I have plans for additions to the layout over the next few seasons but I didn’t want to get overwhelmed so I started small. 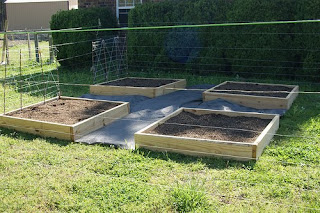 I built my raised beds myself. I purchased untreated 8′ 2×8’s and cut them into 4 foot lengths. I made squares and secured them with 3″ decking screws. The whole process took about an hour for me to do by myself.

The next step was placing the beds and preparing them for planting. The first thing I did was layer the bottoms of the beds with several layers of old newspapers. The papers will eventually compost out but serve as a barrier for the weeds while your plants get started. They are not completely weed proof but you will get better results than you would if you planted directly over the grass. 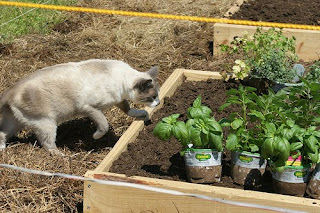 Raised beds require the addition of soil. I chose to use a mixture of organic compost, peat and organic garden soil. To determine the amount of soil you need for a garden bed you will first need to convert all measurements to inches and then use this formula: LxWxH/1728 (the number of cubic inches pre foot). My garden beds needed about 10 cubic feet of soil each.

After adding the soil to the beds I decided that I wanted an extra layer of protection against weeds and opted to mulch the areas between and surrounding each of my garden beds. I began by laying down a weed blocker fabric over all of the paths. I then covered the paths with old pine needles and such. I chose pine needles because we raise Loblolly Pines and have forty acres of pine forest that is full of pine needles! It was free and readily available. Other great choices are hay and bark mulch. Of course if you have the time and money you could also build brick or stone paths around the beds! 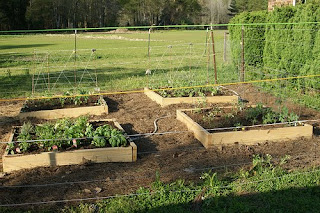 We have three English Mastiffs that love to dig and three horses that are magnetically attracted to gardens when they are ranging so I also found it necessary to build a fence around my garden to further protect it. Again, I was able to use repurposed items I found around the place. For my fence posts I used some old T-posts that were in the barn from when we rebuilt our pasture fence last summer. The fencing itself is a variety of random things I found. It is part extension cords, part nylon rope, part electrical wire and part fencing wire. It is funny looking but it is functional!

Then came the planting! For my garden I decided to choose the things that we eat the most of and add in a few things we should eat more of. I also added an herb section. So I spent a good part of this morning putting out a variety of tomatoes, hot peppers, banana peppers, red and yellow peppers, lettuce, sweet corn, yellow squash, zucchini, cucumbers, sweetpeas, basil, oregano, thyme, cilantro, parsley, dill and sage. I also added two new lavender plants and two new rosemary plants to the flower bed area in front of my house. We also have pumpkins and cantaloupe planted in the back yard. (These we so into disked up soil.) 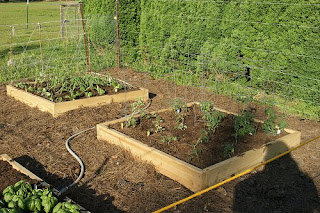 It was a lot of work to get started but I am excited about having a bountiful harvest. I have already begun collecting canning jars and freezer jars so I can save all of the excess bounty.

Julie Kohl blogs at http://www.eggsandherbs.com/. She is a k-12 art teacher and “mother” of four dogs! She and her husband (known as Mr. Post It Notes to any blogger that attended the Pioneer Woman's Cookbook signing) have 3 english mastiffs and 1 golden retreiver. She loves creating things and crafting things. Her blog is a companion to her other websites www.willowtreecreek.com and www.willowartist.etsy.com . Julie would love to eventually make a career out of crafting but right now is happy teaching.