There Is Always That One Girl

Nine years, you ask? Why not ten?

Nine because the hubs went to such a small school that rolling together three graduating classes into one reunion was the only way to draw a crowd.

He went to school with an amazing group of people, many of which I had never met, but ended up having a fabulous time with.

But there is always that one girl.

You know the one I speak of. The one who perhaps has self-esteem issues. Or maybe just loves rubbing up on any man that doesn't belong to her.

The one you catch trying to dirty dance your husband right next to you. The one who gives many more hugs than necessary and fawns all over him to the point of ridiculousness. The one you mutter under your breath about but remember that you are a grown woman who wouldn't dare stoop to the level of grabbing said girl by her hair and smashing her face in the bar.

Ahem. Yeah. That one.

Then you realize that your husband isn't her only target. Any human with a penis and within her eyesight is fair game. Every time you turn around she is wrapped up on a man, married or not.

Then you start to feel sorry for her. A little. Because obviously she has issues and you are the bigger woman (figuratively) and oh that poor girl, bless her heart! She must need attention badly.

And at this point you've forgiven and forgotten all. That is unless she tries to touch your man again, like she did as you were exiting the bar on your way home. And at that point, all your class goes right out the window as you holler an extremely vulgar obscenity at her, stare her down, and watch as she runs back inside.

Decorum be damned. Nobody messes with my husband. 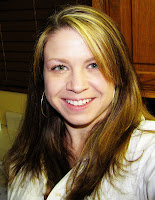 Ashley spends her days in a tiny Arkansas town mainlining coffee, wiping counters, floors, and bootys, pretending to be a soccer mom, acting like she's a runner, chasing armadillos out of her orchard, in a constant state of remodel on her house and herself, loving on her three children and one amazing hunk of a husband. And blogging. Don't forget blogging.
Posted by Arkansas Women Bloggers at 8:26 AM