This post originally appeared on At The Farm on February 15, 2010

Not for any women's liberation statement, but for comfort!  It is winter, I wear several layers so no one knows if I have a bra on or not.

When I come home from work, the bra is the first thing to leave so why wear it at all?

The battle of me and my bra goes back decades.

I remember my anger at growing breasts.  I could no longer skin up a tree or lay on a table while reading and they hurt when hit with a baseball!  Whose idea was this anyway?  I detested this new addition to my body.

Then Mother bought the wonder of all wonders...a training bra.  Who is it training?  Training us to bind our bodies to be uncomfortable?  It is not like I had to hold them in, they were tiny, sensitive and in my way but I did not need any thing to hold them.  Somedays I would remember to wear it, others, I forgot and no one knew the difference.

As they grew, we got to graduate to a newer, better, more womanly bra.  These were like cardboard with ever increasing circles sewn around the cups.  Looked like the brass bra breast plates of women warriors.  I remember one girl in school whose cup did not runneth over.  She went to sharpen her pencil, unaware that one side had dented in while the other was pointed straight out.  These bras could have flats so girls stuffed tissues in them to avoid the embarrasement of an unseen flat.

>Then, thank goodness, women did start burning their bras and it was not unusal to see women braless.  I envied their comfort, their freedom.  Our house rules were, when you are in the public eye, wear a bra.

I have discovered that I have reached the age of "don't care".  Comfort is my guide.  I sit braless, drowning in comfort and have a smile on my face, ah, the freedom. 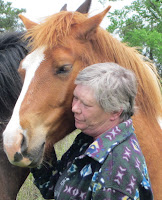 Gail Williams was born and raised in Arkansas with a few side trips to other states. She lives on a farm with my husband of thirty-eight years, a grandson and a sister next door. Working outside the home is juggled with farm life and life in general. Blogging is her outlet, because, as Gail says, "It is much cheaper than therapy."  Gail has two blogs: http://gailatthefarm.blogspot.com/ and http://fosterdogsatthefarm.blogspot.com/.
Posted by Arkansas Women Bloggers at 7:33 AM