This post originally appeared at Stop Clamoring Already on October 30, 2010.

I take exception to the adage that something worth doing, is worth doing well. Some things worth doing should be done hastily, with hot glue. Take Hallowe'en costumes for example.  Exhibit A:  this clown costume I made for my friend Carl- the slapdash construction really gives it that esoteric thrown-together-in-a-lonely-guys-basement vibe that really ratchets up the creepy factor.  You just can't get that effect with straight seams. 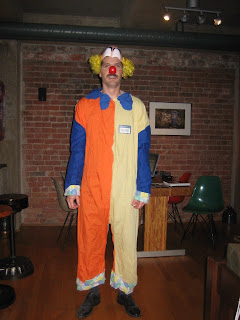 This year my sloppy costume workmanship also saved me some heartache. I came up with this really cute Wonder Pets costume idea for Declan since that's his favourite show.   The Wonder Pets are a turtle, duck, and guinea pig who travel around the world using teamwork to save animals in trouble.   I made Declan a Linny the Guinea pig costume, and then made Tuck and Ming Ming costumes for our two dogs, and then converted Declan's wagon into the WonderPets signature ride, the Flyboat. 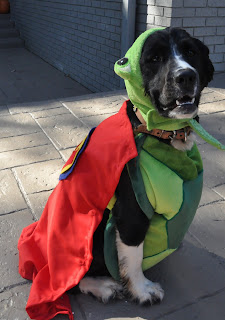 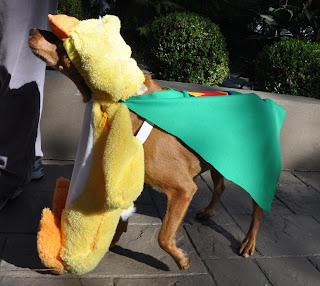 Cute yes? Sweet to make all these costumes so that Declan can experience the wonder of bringing his favorite tv characters to life with the help of the family dogs, yes?   Well Declan won't go near his costume. He will not put on his homemade guinea pig costume, for love or chocolate. Not for a millisecond.  I put a stuffed panda bear in Declan's costume just to photograph it for posterity.  Declan did not mind being replaced at all. 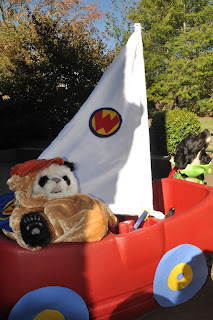 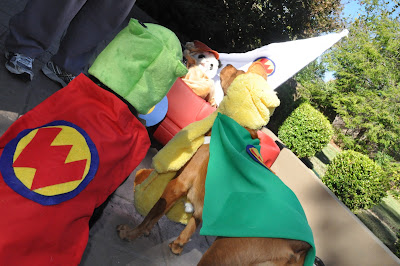 The only costume he will abide is his half-price store-bought K-mart costume that he picked out himself:  the ultra-flammable polyester purple crayon outfit.   Now if I had made his Wonder Pets costume with care as well as love, used a pattern, measured something, taken the time to cut in straight lines, sewed instead of glued and stapled, I might really be kicking myself right now for wasting a tremendous amount of time. As it is, I can appreciate what a cute purple crayon he makes! Adorable! 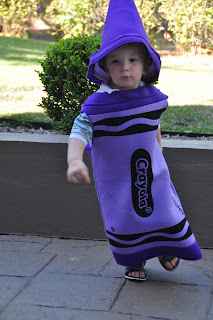 Moral of the story:  we feel so much pressure to do things well, but sometimes it's okay to just do things. You will be seeing a lot of that purple crayon as I catch up with pictures from all 5 Hallowe'en parties we went to this week.  So things worked out - no way that guinea pig costume would have held together for a whole week of two-year old candy-fuelled mayhem. 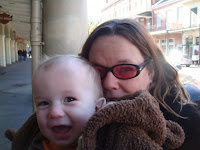 Lee-Ann Whitlock is a Canadian who currently lives in Central Arkansas.  She applies her quick wit and candid sense of humor to mothering her 2 year old son, fostering rescue dogs, and life in general.  Her blog is Stop Clamoring Already.
Posted by Arkansas Women Bloggers at 12:56 PM