I couldn't have told you this morning who Arséne Houssaye was, and at this moment I can tell you little beyond the fact the he was a 19th century French poet credited with one of my favorite quotes. "Tell me whom you love, and I will tell you what you are." Heavy stuff, right?

This post will be the first time many readers have heard from me, so I thought it only appropriate to tell you what I am. The best way to do that is to tell you what, and whom, I've loved. I transplanted myself from a very rural area into a small city for college and then a bigger city for work. It's a common story, so common that I took it as a given. After two layoffs in two years, I'm questioning that assumption.

It is only in recent years that I have come to a full realization of what I left behind and how much I miss it. I miss traipsing through my parents' huge garden, getting tangled in the blackberry patch with my grandmother, and tearing up and down the gravel road on bikes and bare feet with the gaggle of cousins who lived whistling-distance away. Family and friends are not unique to growing up in the country, I realize, but they were a legacy I was born into there rather than something I've had to struggle to recreate for myself in the city. I miss that ease.

Sometimes I wonder if I gave up my birthright. I miss little girls who were more concerned with fishing than beauty pageants. I miss young men that were raised to be gentleman and knew how to treat a woman like a lady. I miss one in particular who had the audacity to ask me to go raccoon hunting on our first "date."

Yes, I'm serious. And I went. If you are still with me at this point, you will enjoy the story.

I looked in askance at his Bevis and Butthead T-shirt, a choice of attire that I knew my parents would notice, not mention, perhaps, but notice. He handed me his sister’s coveralls. She was four years younger than me and all of a size two. I could not have fit one leg into them on my best day. The first sparks of infatuation were, perhaps,  even more blinding than love. Embarrassed, I pointed out the obvious. He offered me his coveralls and traded up to his dad’s. I, by the grace of God, slid the pair on. They weren’t a bad fit once a foot or so of the legs were rolled into cuffs. There was a height difference between the two of us that soon made me gain a whole new appreciation for porch steps and truck step-sides.

I climbed into the truck, not knowing until later that I had ousted Ace from his seat of honor in the cab. That fine dog suffered the indignity of the truck bed for that night at least. We were formally introduced in the back yard, and I suspect that Ace was partial to blonds. Dogs can always sense if you are a dog person, and they can sense respect versus bullshit better than any human I have ever met. If I had known half of what that dog ever forgot about his master, well, who knows where that would have led? There is something about the bond between a boy and his dog that even a seventeen-year-old’s hormones cannot overcome.

It was not the worst date I have ever been on, and it was certainly the most memorable. I have always been a sucker for old pickups and back roads, although the moonlight is hard pressed to work its magic when your companion has a shotgun in hand. We walked and talked. I do not remember what we talked about – dreams, aspirations, teachers we could not stand? After twelve years the topics have sunk into a fog. I remember him carrying me over a puddle and kneeling on the ground to re-roll the cuffs of the too long, blue coveralls. I remember thinking I would have been completely lost had I been by myself. When I remember, I forget a hundred things I learned in nights that followed, and I can see with perfect clarity why he became my first love and, in part, made me what I am. 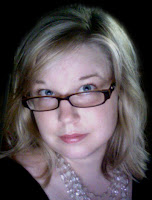 Stephanie, originally from Wonderview, AR, now lives in our state's capitol. A freelance graphic artist and a local-food activist, she also owns and operates Calligraphy for All Occasions (please hot link to http://www.facebook.com/stephanie.hamling#!/pages/Little-Rock-AR/Calligraphy-for-All-Occasions/110014482351548). Stephanie enjoys gardening, sewing, soap making, cooking, and running. You can indulge in more of her musings by visiting her blog proactivebridesmaid.wordpress.com, which will celebrated its fifth anniversary this June.
Posted by Arkansas Women Bloggers at 7:00 AM