Now that school is back in session, here are some real food suggestions for lunch.

The first two pictures are my first grader's lunches. 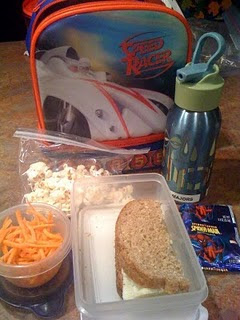 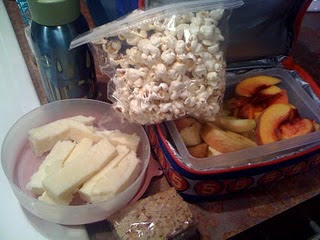 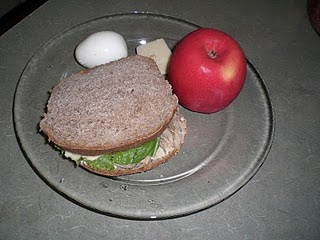 Below is HB's kindergartner's lunch: mild cheddar cheese and wheat bread sandwich, popcorn popped in coconut oil, apple, soaked granola with extra raisins, in the sippy cup: water kefir, and of course, a napkin note because man does not live on bread alone. 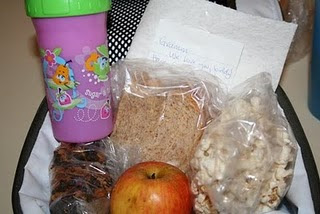 Erin also has elementary aged children. They get cheese or hummus quesadillas (on sprouted tortillas and fried in coconut oil), carrot sticks, organic applesauce, and homemade organic popcorn or granola for snack. If they didn't eat an egg at breakfast, she would probably send a hard-boiled one in their lunch. 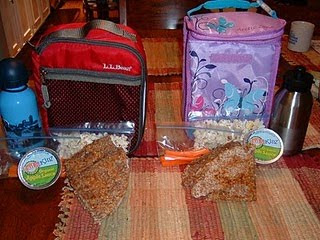 Other ideas for real food lunch include:

- leftovers from the previous night's dinner. 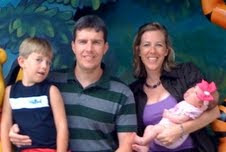 Julie's real food journey began about the time she was diagnosed with gestational diabetes in 2004.  It has been a slow, progressive process with the adventure ramping up in 2008 when she was introduced to Nourishing Traditions and the Weston A. Price Foundation.   It has seemed more like a wilderness safari than a winnebago chartered road trip!  Julie points to real food as being one of the reasons she carried a baby girl to term (May 2010) after two miscarriages and five years of unexplained infertility.  She enjoys teaching and connecting others to real food.