Of Gyms and Poop and Disappearing Panties

This post originally appeared on May 21, 2010 at Rants From An Old Trout

Maybe it's me, but this couple at the gym this morning seemed really squirrely. They carried a big red bag around with them, from which they pulled towels and hand sanitizer (even though the gym provides both). They layered every inch of each machine with towels and carefully sanitized their hands before and after using the machine - like they were even afraid of their own cooties. I'm not sure, but from the size of the bag and the number of the towels, they might have used new towels on each machine.

I didn't pay much attention to them until the end of my workout, where I rotate on three machines. The unspoken etiquette is that if someone is rotating on the same machine, you politely ask if you can work in with them, and they politely say "but of course!" While I'm on the first machine, I notice that Sanitizer Lady has spread her wealth of towels all over two machines, one being the the second in my rotation. Since she wasn't using it, I politely asked her if I could work in with her. She reacted as if I'd ask to borrow the panties she was wearing. Not saying a word, she got up from the machine, yanked the towels off and stalked away. She and Mr. Clean no doubt had words about the filthy swine trying to horn in on their workout. On my second round on said machine, Mr. Clean has spread all his germ-free towels on it but is standing in front of another machine. The same request ensues, except as he snatches the towels away, he hissed at me "we are working a circuit!" I cheerfully told him that I, too, was working a circuit, and he again hissed at me "well, isn't that good for you." He sounded a bit like Arnold Schwarzenegger, and I badly wanted to say "I'll be beck."

If they use the locker rooms, I'm guessing they also carry those disposable things you put on the toilet seat to ensure you don't get crabs or herpes, as well as Lysol, Drano, bleach and lots of rubber gloves. Except I bet they don't use locker rooms, even to pee.

I don't know of any specific rules for locker rooms, but I don't appreciate women who act offended that I comb my hair, apply moisturizer, etc., while in my unmentionables. For one thing, I'm hot after a good workout and shower, and for another I was raised with three sisters and a brother and we shared one bathroom. Enough said. But from some reactions, you would think I'm pooping on the floor or dancing around stark naked using a toilet plunger as a microphone while singing "I Enjoy Being a Girl." I know what you're thinking -- maybe she looks like a troll -- but I don't look like this. 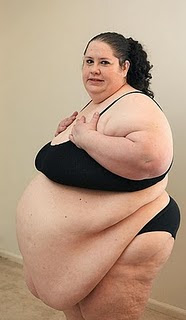 Not that there's anything wrong with working your way up to 1,000 pounds.

Although I admit I look a little scary after bathing, especially when I can't camouflage my extra head, Tiny. 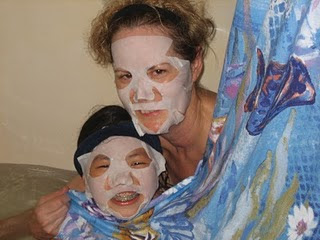 I must digress here because we love poop stories in my family and we love to share them with loved ones. Years ago, John and I were packing for Florida and I could only find a few pair of panties. So when we got there, we stopped in a K-Mart to shop for temporary emergency backup panties. While there, I walked into the bathroom and someone had pooped right in the middle of the floor -- not on the floor of a stall, but the almost exact center of the floor. Aside from what goes through the mind of someone who takes a crap in the middle of the floor -- wouldn't you worry about getting caught? (And my skivvies never showed up at home - it is still a mystery.) My youngest daughter REALLY couldn't believe it when she discovered that someone had pooped in the middle of the shower on a camping trip to Petit Jean. This was many years ago, and it provided conversation for the entire weekend, mostly starting with the girls saying, "Mom, why would someone poop in the shower? That's SO disgusting! How could someone do that?"

One more story about the locker room. On two occasions, I've seen a very sweet but perhaps a bit dotty older woman wash her hands vigorously -- as if she's prepping for surgery. Then she carefully dries them and then steps in to use the toilet. Then she exits without even rinsing her hands. On the other hand, she doesn't bat at eye at me. 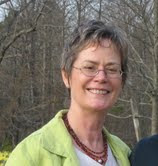 I've been blogging for less than a year. I'm one of those people who say "I want to be a writer," but either I don't get around to it or I don't show my work to anyone because it's never finished. I find blogging perfect because:
. No one can refuse to publish my work
. The majority of my followers are close friends who think I'm funny no matter what
I live with my husband, two daughters (9th graders this year!!!!) and two dogs. I am currently looking for gainful employment.
Posted by Arkansas Women Bloggers at 7:56 AM